Click anywhere on this paragraph to listen to my album, “No Manuscript”, performed completely on The Hammersmith Pro. These 12 piano improvisations will give you the full character of this instrument.

One of things I do in order to make music is to find sound sets (sample libraries) that help me to create musical pieces that are satisfying to the ears. Initially, the only ears involved are my own. Eventually , I hope that you will listen, so I want sounds that are as universally satisfying as possible.

I have the great joy of frequently getting to play acoustic pianos. For example, I’ve just been in a theatre pit band playing a Steinway grand. It’s great to be able to compare these to the virtual pianos that I play in my recording studio.

It’s rare for me to find piano sounds that I love from the moment I listen to them as I play the keys. There is now one exception: Soniccouture Hammersmith Pro. (This virtual piano also has a “standard” edition. Since I licensed and use the “Pro” version, that’s the only one you’ll read about here.) 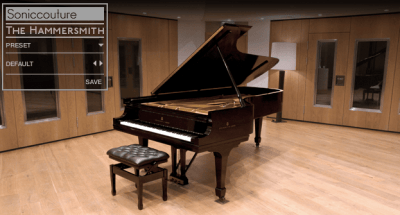 I was worried when I started to load this instrument into Native Instruments Kontakt 5 (which is required to run the Soniccouture product). Though the disks on my computer are fast and there’s plenty of memory, the load time was longer than most instruments. And then I remembered that a larger sample set could mean more detail and definition in the sounds it can produce. So, I waited for Hammersmith to be ready to play.

From the very first notes I played on my keyboard, I was impressed. I had the sense of playing a real piano for the first time (without sitting at an actual Steinway). The result was that I plunked on the virtual instrument for longer than I had intended to. 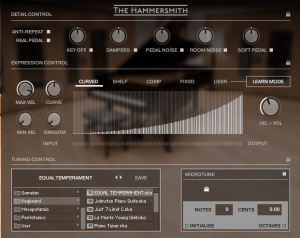 One of the things that I almost always have to adjust when I play virtual pianos is the responsiveness of the sounds to the striking of the keys. I tend to have a heavy touch on the piano, so being able to adjust velocity (the speed at which the keys are struck) curve. Hammersmith Pro has a wonderful page in its settings dedicated to the bridge between the player and the instrument. While all interfaces offer the ability to set the curve and maximum values, the interface (try “Learn Mode” if your own adjustments aren’t getting you there) and the responsiveness of this sound set seemed to follow the humanness of fingers on the keys more than most. Using this, I was able to get one of the most satisfying experiences I’ve had with playing “piano”.

Over the years, I’ve used more than a dozen other virtual pianos. 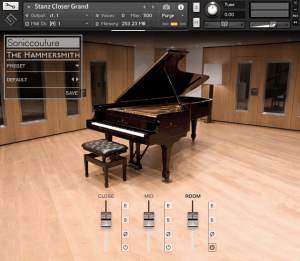 Hammersmith Pro also offers three mic positions: close, mid (middle-range), and room. Each of these can be nuanced even further by selecting one of two microphone sets that were employed to record the (real) piano. I’m especially fond of the close mics — giving a sense of sitting right at the keyboard — and room mics — offering the “house concert” sound that includes pedal release sounds (if you want them). You can turn on/off piano idiosyncrasies (such as dampers) and room sounds. 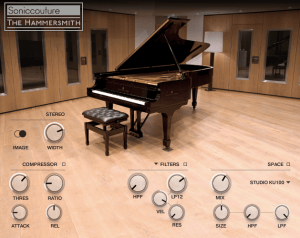 The real fun began when all the technical tweaking was done and I could simply play. Even after hours of playing on this “piano”, I continue to be impressed with the subtlety of the sounds and responsiveness. Do I recommend Hammersmith Pro? I do. I paid $230 to license this instrument a few months ago and it’s already been more than worth it. Next, I’ll be posting more details about a piano instrumental EP that I’ve recently released in which I exclusively used the Hammersmith.