After the Light Beings appeared at Columcille for Samhain, I said that I would be publishing a video with a new, original score. Like so many creative projects, I procrastinated, delaying the publishing of this beautiful event. Everything in my life became more important than this project I had promised to myself. I’ve written before about how fear and shame can get in the way of creative work, so I’m choosing not to repeat that.

Instead, let me just say that once I started to create the music, it was an interesting and fun process. First, this was the maiden voyage my recently rebuilt studio. That was enough to may it intriguing. Most of the software were at version levels that I’d never previously used. 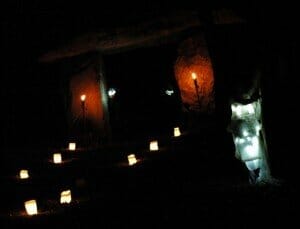 Second, I started off with a piece that was heavily percussion-based. I layered numerous performances of my own drumming. In the end, they only provided a time-consuming metronome as I eventually dumped all of the drum and percussion tracks in this current version of the score. But this definitely delayed the completion of the project.

Third, I was reminded how much improvisations are part of my composing. Each of the elements (including the ones that did not make the final cut) started as a spontaneous recording. Most of these improvs became parts of the structure and melodic themes.

As I developed the score, I was continually reminded of the beauty created by my friends who are the Light Beings. Each frame of the lit-up angels strikes a chord of awe and any music would have been dim by comparison with the enchanting visuals.

Above all, these Light Beings dancing on such a dark, cool night, are welcome reminders that human beings can illumine our world enough to see beauty. Each person enlightens his/her own space and we can welcome or shun this ability to see in the metaphorical darkness that seems so often to envelope our world.

So, here is the movie as it stands: created from video snippets from their Samhain (Halloween) dance and now with music added just in time for the Winter Solstice. May you be inspired through all the seasons of the year to be a being of light.

15 thoughts on “Return of the Light Beings”