Music can express all sorts of feelings. Improvised music can have a particular niche when it comes to these sorts of expressions. It has the vantage point of coming directly from the moment that the emotions occur or as an embodied response to that moment. Improv by it’s very nature is about the present moment and whatever lives in that instant.

There I go, dealing with my own experience in abstractions again. It’s a handy way to distance myself from my experience and feelings. And it’s not the point of what I want to say here. I want to describe something that’s indescribable. No wonder that I’m trying to avoid it.

Over a recent weekend, I was in a mood. I couldn’t describe it in words. I knew some of the background of what might have led to me “having feelings”, but I did not know all of it. I had a sense of being stuck; as if the feelings wouldn’t just go away or move along like the energy in motion that they are. 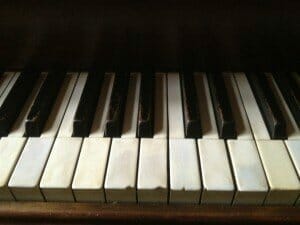 In a wonderful twist, it was one of those weekends when I had plenty of musical playing/performing to do: I accompanied a church congregation and choir through hymns, anthems, responses and added my brief, improvised bits of pipe organ music in the morning. Then, in the afternoon, I played guitar with Pennsylvania String Ensemble at a bridal show. Penn Strings — as we’re usually known — performed everything from Vivaldi to Kahn/Erdman/Russo (“Toot Toot Tootsie Goodbye”) to Beatles to ColdPlay that day. Each of these was wonderful in it’s own way. But my mood did not really shift.

So, once I got home to my newly re-created digital recording studio, I decided to record some improvisations. The first two were in some of my “usual” styles. They did nothing to alter my emotional state and did so little for me musically that I did not save them.

Before the third improv, I took some long, deep breaths and closed my eyes. I opened myself to that inner/outer awareness that I can only describe as spirit.

The resulting spontaneous composition was simultaneously haunting and cathartic. Whatever the mood had been, it was finally shifted when the piece was complete. I still had no words to describe it. And the feeling had clearly been expressed in a way that would allow it to release.

I’m grateful to have this means of expression. Each time I remember to allow it to work its wonders. I am a new man.

* Warning: this is not “just another one of Stan’s nice little piano improvs.” Listen at your own risk. 🙂