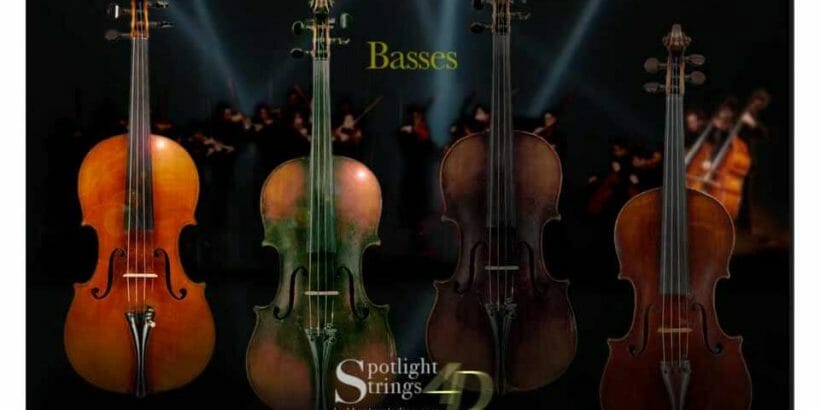 This is the second of two brief videos comparing orchestral string libraries. (If you want to know what a “string library” is, click on this sentence in parentheses.) The first video compared larger string ensemble sounds. In this one, I used the same MIDI data split into separate voices for the sound of a string quartet made of violin, viola, cello, and bass.

As I noted in the first post about these two videos, the raw MIDI material for this comparison is the same for each library you will hear. This time, I pulled out four lines — one each for violin, viola, cello, and contrabass. I did not do any editing for the specific library being heard. Each version you hear in the video is from the same “raw materials”, so to speak. What you hear is what you get.

For most of the libraries, it was easy enough to find a useable solo “instrument” for each of the parts. There's one exception that I'll note when I describe it. You'll also hear a significant variation in volume among these libraries. I chose not to “fix” that (nor any of the other parameters of the sounds) so you'd know where each library starts.

One (or Two) of These Strings Is Not Like the Others

The first version of the little MIDI track I created I played through the Kirk Hunter Studios' Spotlight Solo Strings 2.0. Though this library is no longer supported, when it was released, it was one of a kind in terms of the control available through the Kontakt instrument. Unfortunately, when I compare it to its current competitors, it sounds more like an accordion than a string quartet.

So, at 00:45 we move on quickly to IK Multimedia's Miroslav Philharmonik 2. It would take considerable work to make this sound convincing as a small chamber quartet. Yet somehow, this library remains immensely popular.

Over the years, I've licensed many Spitfire Audio libraries for Kontakt. None of the returns on these match their price tag. Spitfire Soloists is a case-in-point. To my ear, it sounds okay at first and does a decent demo (until the weird bow re-articulations in the final chord). But try to mix this in with most arrangements and you'll quickly hit any number of roadblocks. You will hear this library in the video starting at 01:30. Note that this library is also missing a bass solo instrument, so I used a contrabass sample-set from a freely-available resource.

I also (big mistake) licensed the Spitfire Audio Solo Strings library (starting at about 02:14). This is a much more recent offering, so you'd think Spitfire would have overcome the issues in Soloists, but instead, it simply created a whole new set of issues. Numerous problems with this library include lack of nuance in the vibrato when shifting from no-vibrato to vibrato; re-bowing hiccups in sustained notes; a huge hit on CPU and memory for some patches (I had to play this in Kontakt 5 because it produces audible glitches in Kontakt 6); and room/reverb sound in all three mic positions that cannot be turned off. My advice? Avoid Spitfire libraries (for Kontakt) like the plague unless you have unlimited time to mess with their products and support staff.

Mercifully, at 02:58 in the video, you can hear Studio Strings 2 from Native Instruments. These sounds are a bit of a red herring in this video since this is not a quartet. This is a chamber ensemble with 2-4 players per part. You can purchase this library as part of their Komplete series or as a separate library (standard or pro versions). Obviously (since both are Native Instruments products), this is another Kontakt library. I'm really pleased with the sound of this instrument. Because of its features, I was able to use the original MIDI file from video one. It automatically splits the four-part track into the separate violin, viola, cello, and string bass sections for you!

The Other Kirk Hunter Studios library

Finally, you hear Kirk Hunter Studios' recent Spotlight Strings 4D in this video. (This is another Kontakt library.) Though it is not as compressed (loud) as the previous “quartet” and I've encountered a few quirks of the interface, I'm confident that you'll be hearing a lot of this library on my upcoming tracks. It sounds very similar to real strings in this demo and the functions available have already impressed me greatly. This library is versatile (soloists plus three other sizes of ensembles, nuanced vibrato adaptation, broad dynamic range, and more) and works well with very little tweaking.

Let me know if you'd be interested in a detailed walk-through of this 4D library from Kirk Hunter Studios. That would be something I'd be happy to do if there's enough interest. (Please leave a comment or contact me on Twitter.) I hope you found this quick comparison video of string quartet libraries helpful.