I’ve already written about the most important aspect of “Snow Story”: awareness about child abuse and the need for positive parenting. Still, when musicians create evocative music and video, it helps to get the point across. In order to arrange the studio version, I used some music technology that is quite effective. 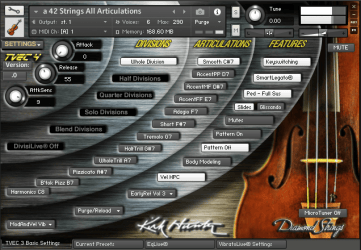 On several of my recent studio song recordings including “Drink In” and “Mountain Rose”, I’ve made significant use of orchestral sounds from Kirk Hunter Studios. Notably on “Rose” where I featured French horns, woodwinds, and strings, Diamond Symphony Orchestra was quite effective. I expect that Diamond will be my go-to orchestral sample library in future recordings.

When you listen closely to the studio version of “Snow Story”, you’ll hear the large string orchestra from this sample set. Yes, under those distorted guitars and drums, there is a full symphony filling out the sound. As the final chord fades, you’ll hear the strings almost on their own. Check it out.

Though I play acoustic guitar, I use sample sets to create electric guitar sounds on my recordings. One of the most versatile libraries I’ve found for this is Pettinhouse Direct Guitar. Not only does it sound good “right out of the box”, but the interface allows for easy tweaking. You’ll have no trouble hearing the electric guitars in this mix!

MODO Bass from @ikmultimedia is a fun and easy modeled instrument 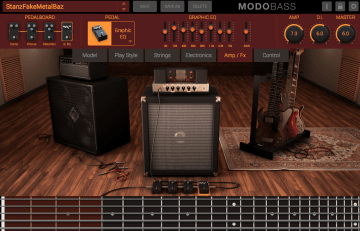 Speaking of music technology: many thought that modeled instruments would be the next big wave after samples. While there have been lots of interesting or quirky results using modeling technology, I’ve rarely been as impressed as I was when I started to use MODO Bass on this song. IK Multimedia did their work on this one well.

MODO is a modeled electric bass guitar. Besides a host of different bass models to choose from, the user gets to decide how old the strings are, if they are played with a pick or fingers, and so on. Additionally, MODO lets you select the effects and amp being used (or not).

I found their approach allowed me to create the sounds I was looking for with minimal fuss. As you listen to the song, notice how I used electric bass harmonics in the first and last verse.

Obviously, if money were no object, I would love to have hundreds of musicians creating these sounds in my recording studio. Since I cannot afford that, I’m really grateful for music technology that — for now — allows me to create the big arrangements I hear in my head. And all from the comfort of my home.

If you have questions or comments about the song or the technology, please be sure to leave them here. I’ll respond to you as quickly as possible. Thanks for dropping by and listening.