A huge thanks to my online friend, Linda Freeman, for this guest post. Learn more about Linda and how to reach her at the end of this post.

Be sure to also check out her post of music video tips on the awesome Sessionville blog.

As a songwriter and executive producer who enjoys the creative process, I’d like to share some “behind the scenes” information about the making of the music video for the pop power ballad, “Avalanche.”

I worked with Ben Mahoney Productions in Chicago on the “Avalanche” video, which features a talented singer and actress, Crystal Corinne. First, some background on the song: It’s about a woman who goes from feeling devastated and paralyzed by a relationship breakup to being empowered and able to move forward with her life. 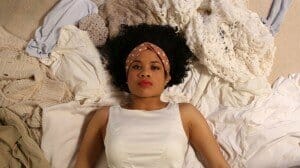 There were four major aspects of this creative process that were especially striking:

In conclusion, being creative is not just coming up with unique ideas, but also having the skill, dedication and professionalism to see them through. I was glad to be part of this process in the making of “Avalanche”.

Linda Freeman is a BMI member who has been a songwriter and producer since 1992.  Follow Linda on Twitter at http://twitter.com/lindafreeman_ and listen to her other songs at https://tiw-music.bandcamp.com/.