Part of the beauty of Twitter is the brevity. But there are some things you can’t say in 140 characters. Answering the question

is one of those.

I don’t know exactly what drew my attention to it. (Probably one of the dozens of Twitter interface remodels.) Suddenly, it was right there in my face. At some point, I had gone past 100,000 tweets. Well, I was really surprised. 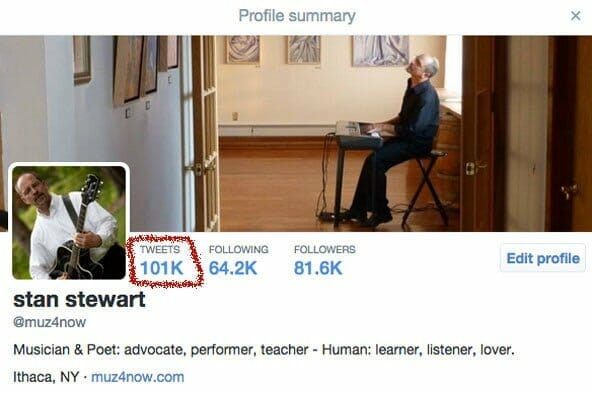 So, what does it mean? Have I enjoyed it? You bet. I’ve met interesting, fun, delightful, intellectual, inspiring, and crazy (in a good way) people. There are many I’ve supported, collaborated with several more, argued with one or two, apologized to a few, gotten great content to re-share from thousands, and so on. Another bonus: travelling to visit Twitter friends all over the world. I want to do more of this.

Have I had fun? Yes. Some tweeps are very playful and that makes it worthwhile even when there are a few hecklers and too many spammers.  Plus, I’ve been able to share a ton of micro-poetry and what I call a “story in 140” storytelling form. Here’s an example:

“…just imagine”, she said, “that everyone in the entire world loves you.”

Have I benefitted? Oh, yes. The readership on this blog went from about 30 to hundreds subscribed, plus thousands of “anonymous” readers every day, and still growing after I started tweeting regularly. Twitter is one of the main sources of traffic to this blog. My music distribution has benefitted — my best-selling digital-only album was only released a few months ago. Best of all, I’ve been able to share what I’ve learned along the way with others — hopefully allowing a few to avoid the mistakes I’ve made. In other words, I hope it’s benefitted some of you, too.

I was walking along a local lake with my beloved wife. We both started to notice the beautiful moonrise glistening on the water and looked at each other. Then, I began to have thoughts like “Oh, it’s been a while since I posted a photo to Instagram which will also go to my Twitterfeed.” So, I pulled out my phone. My wife very gently touched my wrist and said something like “I was really hoping we could enjoy this moon. Just the two of us.” (You’ll notice there’s no photo of the moon reflected on the lake here.)

When social media is a distraction from really living, stop.

Has tweeting added meaning to my life? It’s helped me to add friends, connections and fun. That counts for something. In some ways, 100,000 tweets has changed my life for the better. But there have been negative impacts on real life relationships that I can never regain as well. Social media (not just Twitter) takes time and can often look to people in my day-to-day life like a distraction from what’s important. And sometimes, it is just that. When social media is a distraction from really living (when it’s an addiction), stop.

Social media may connect us with real people from all walks of life and all around the world. But it does not replace our relationships that happen in physical space with the people who are in our daily lives.