Please click here to read my updated views on Patreon.

Crowdfunding is fast becoming a “normal” avenue for musicians and other creative people. First, there was Kickstarter. Then, music-specific sites like PledgeMusic. More recently, Patreon put its hat into the ring.

Most crowdfunding models center around a specific project. In the case of a musician or band, this might be an album or a video. Instead, Patreon came at it from the angle of ongoing support; or like a patronage. Artists can opt for a monthly or “per-item” approach. For example, many artists ask for pledges for each video or song they publish. I chose the per-month patronage since I hope to be making an increasing number of recordings/videos over time, so I don’t want to break the budget for any of my patrons. Speaking of which, Patreon built a monthly maximum into the system so that each patron can watch their own expenditures. 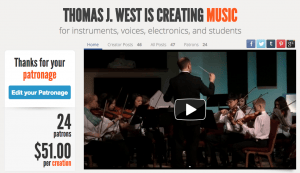 Artists can then dress up their page with their art. Musicians can link to or directly upload images, songs, videos, or whatever. You can display these publicly or privately on your page. 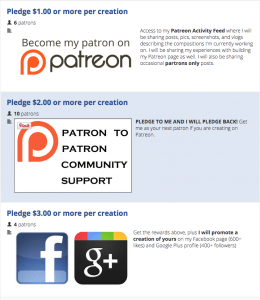 Like most crowdfunding, artists offer something back as a way to reward their patrons. Rewards always include access to private shares on Patreon. Additional benefits can include downloads, Twitter shares, or whatever the creative mind of the artist can imagine. This can be a fun way to engage with the community of supporters. I’ve noticed several artists offering a “chat” of some form as one of their givebacks.

The only entities that I can find on Patreon with good revenue are the ones who already had a big following (e.g., tens of thousands to millions of YouTube subscribers). Jerry Banfield agrees in his review. And as Jerry says, not everyone has this huge following already. In his words, “Patreon is tough.”

Patreon does not police the givebacks as far as I can tell. One of the reasons I mention this is that some of my initial pledges had perks affiliated with them that I have not received. I’ve written privately to each of them and hope it’s just an oversight. Another issue on Patreon is that pledges can be cancelled at any time including after the (former) patron has already downloaded artwork. Rumors say that they are working on a fix, but I don’t see one so far.

What really works at Patreon:

Patreon works best for artists who already have a following.

Like any support/marketing avenue, Patreon is not a “set it and forget it” site. You’ll get out of it what you put into it. For example, Patreon (wisely) recommends that you create a video specifically for the site. (This video must be from YouTube.) If you’re just setting up your page, I recommend that you take some time to consider what rewards and milestones you want to include before you even start to create your page. Or, like me, you can just keep going back to revise it. 🙂 Patreon is probably not for you if you have no existing following on the web (social media, YouTube, etc.).

Are you on Patreon? It would be great to hear from you about your experiences on this crowdfunding site.

P.S. My Patreon page is gone, but you can support me through my new VIP program!

5 thoughts on “An initial review of PATREON”