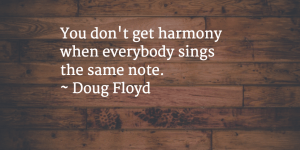 10 weeks of recommendations for people to follow on Twitter. Honestly, that’s probably a record for me to do the same thing that many weeks in a row. These are all wonderful people and hope you’re checking out their tweets and giving them a retweet or two.

This week, I’m doing a couple of sneaky things to recommend four Twitter accounts. Read on to see what I mean.

In volume five, I mentioned the #TDIM (This Day In Music) posts. Marianne Cramer and Kคяεł T Nσσ¡тgεdคcнt are partners who both regularly tweet about the music and musicians of the day.

Besides YouTube videos, Kคяεł also finds wonderful archives of photos of musicians and includes those among these tweets.

Both Marianne and Kคяεł are great supporters of the communities they’ve created or become a part of on Twitter. They are online citizens who make social networking social. In other words, these two people show how we can create a better world together.

I am very glad to know Christine Infanger. Especially since we met in person at a conference, I consider her a friend as well as a deeply respected musician advisor. Her blog is ThirtyRoses.com where you can learn about what than name means. If you’re a musician or music lover, you don’t want to miss her tweets.

One of the things that I like about Christine is that she doesn’t hold any punches. She’s straight to the point in her posts (both on Twitter and her blog). Plus, she has a bunch of other interests that include coffee. What’s not to like about that? So, c’mon: check out this tweet stream, give her a follow, and let her know I sent you.